Return to the Fray

I am firing this project up again.  I am increasing my fleet size, and I plan not only to paint and mount them but to produce complete Traveller deck plans and designs, to implement for Power Projection: Fleet (the Traveller version of Full Thrust), and to use them in a GURPS Traveller campaign.

Stay tuned.  I'll probably post my WIP 15mm figures here too.  They are the crews after all!
Posted by Lentulus at 6:21 AM No comments:

One blog to find them...

have rather a lot of projects.  To try to keep them all moving (followers may have noted that this one is kind of stalled) I am starting (and blogging, I'm hooked) a central plan here.
Posted by Lentulus at 6:40 PM No comments:

A good day at the mailbox 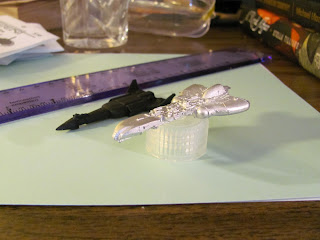 A box of toys came from Rattlehead Games today!

From Dark Realm Miniatures, the Velum Cruiser.  I selected it to complement the Ravenstar Lief Ericson, and it looks like I called it pretty good.  I see the two ships as representing the product of two different design traditions approaching the same engineer problem -- in my "universe" the problem of wilderness refueling from a gas giant atmosphere.  The Velum comes with a pair of retro-streamlined looking fins that make the resemblance even greater. 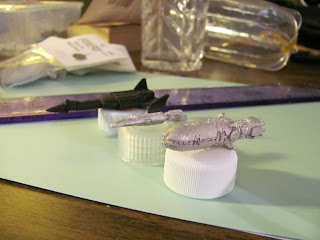 From Ninja Magic, two Jun-ila ships, the Huala Frigate (closest) and (in a 3-pack) the Hamuiya Corvette.  Both are clean, symmetrical designs and very nicely cast.  The both (but the Huala especially) strike me as being a great blend of the level of symmetry I expect in a realistic future warship with a real otherness that does not look retro or NASA its origin.  My fleet will need more of these, but right now this is a nice little squadron. 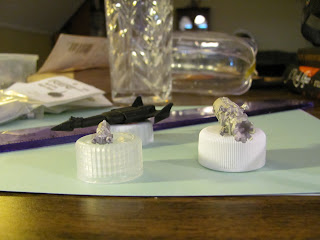 Another view, showing jets that will look right with blazing fusion plasma!

I also picked up a set of Ninja Magic magnetic adapters, and a pack of their general purpose 40mm lead flight bases.  The bases have real heft, and should be able to give good support to maneuvers by pretty hefty ships.  I am looking forward to trying the combinations out. 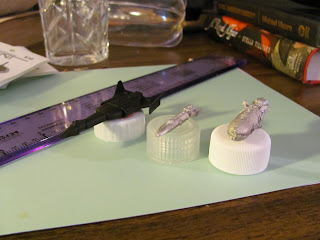 If your are interested in my future history project, I am blogging it here.  Right now I am working through star-mapping and FTL travel issues.
Posted by Lentulus at 3:24 PM 2 comments:

I followed the primer test approach recommended by AsleepByDay.  Here are the results of the priming 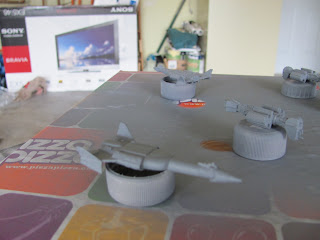 I built the primer up in small coats - the initial coat seemed blotchy and disinclined to adhere well, but the final results, with plenty of cure time, has left excellent detail and stands up to a rub test. 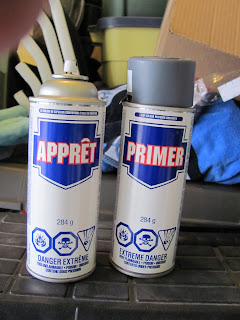 And here is the winning primer (of which I already had a can that was sitting forgotten).  Available at Canadian Tire, cheaper than dirt in both official languages.  I expect as bog-standard a product as you can find 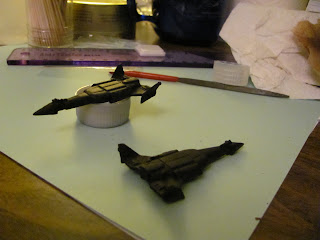 A black basecoat for the warships.  The detail is more visible than I expected it to be. 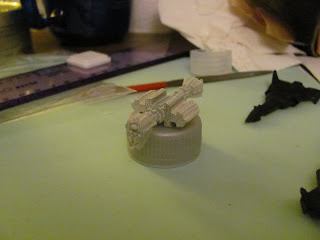 And the merchants in ivory.  Getting a convincing result with these will be an interesting exercise.  They need to look commercial and colorful, but not clownish.  And they need to look a bit used.

This image, from the project rho website, is the sort of look I want for the warships.  We will see how well I do. 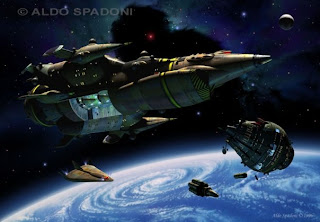 Some Resin techniques to remember

I asked the folks on the star-ranger forum about prepping and priming highly detailed resin ship models, and got some information worth keeping track of:

Some serious safety tips from AsleepByDay, and good advice on verifying primer:


Pre-clean and a primer recommendation from Covertwalrus:

And a troubleshooting guide from johnny rocket

Thanks guys, I really appreciate it!
Posted by Lentulus at 5:18 PM No comments:

From Ravenstar, two Lief Ericsons.  The flash is minimal; they could probably be prepped with fingernail. 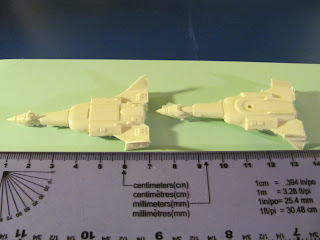 I am not sure what I will use for a notional scale.  The best thought-through reference I could find on the web  offers a "real world" length (based on door heights and other evidence from the original plastic kit) of 170m; so at 7cm overall we would be looking at about a 1:2500 scale.  Not that I feel bound by that. 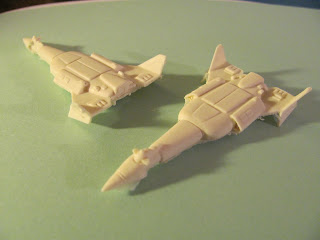 Another image.  I just love the detail.  My current thought on final painting is a near-black relieved by a few bright points and details -- possibly using some 10mm heraldic decals I have around here somewhere.

In my Future History these will be long range cruisers, able to refuel by scooping hydrogen from a Gas Giant (per Mote in God's Eye and Traveller). 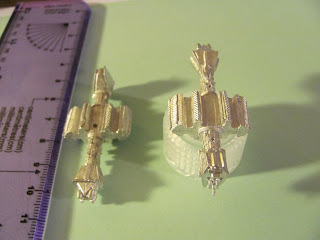 Then I have three Omega destroyers from Behrle Hubbuch III (who posts on the Star Ranger forum). 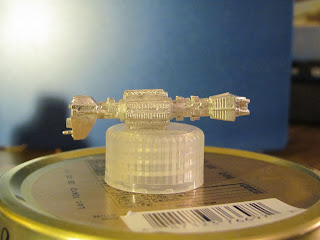 In my future (I find myself wanting to type IMTU but I am not doing exactly a Traveller universe) there will be no artificial gravity, and technology will be in a state of rapid flux.  These ships will represent low-thrust passenger ships with spin-gravity.   I will probably paint them in an airline (or turn of the century ocean liner) inspired civilian livery; for some scenarios they may be troopships, but that happens to civilian liners in wartime anyway. 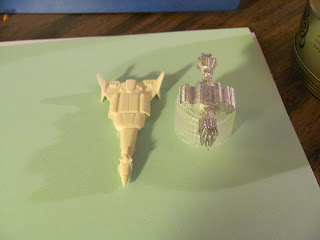 And here are two together, merchant and escort perhaps?
Posted by Lentulus at 5:06 PM No comments: